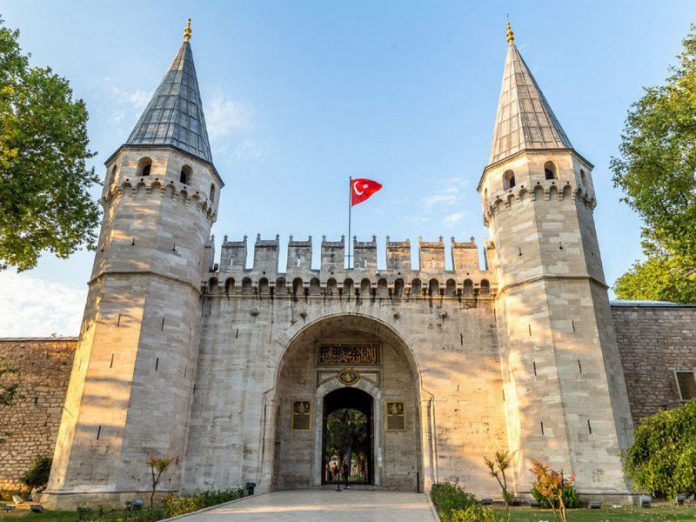 Foodntravelling.com – Merhaba, Istanbul’a hoş geldiniz! Welcome to Istanbul! There are lots of touristy destinations all around Istanbul. Starting off the most well-known Istanbul historical sites the Blue Mosque and Hagia Sophia, guide you to have a scenic Istanbul view over the black sea and many more. Completing your journey in Istanbul with an abundance of extremely delicious Turkish food, it’s beyond imagination!

Today, we are going to guide you to visit the most Istanbul recognizable landmarks! There are Topkapi palace and Rumeli Hisari fortress. Both offer us spectacular medieval architecture. In addition, the transportation to get there is pretty easy, located right in the heart of the city area. Which makes these sites easy to access. Even, for a solo traveler girl, you will find very comfortable trips while being in Istanbul. This city is quite hospitable to all the tourists around the globe. So, don’t hesitate to visit Istanbul whether with your family, friends, beloved ones, or even being alone. Alright, let’s dig into a simple guide and brief history of Topkapi Palace and Rumeli Hisari fortress that will enlighten your knowledge before you go there! 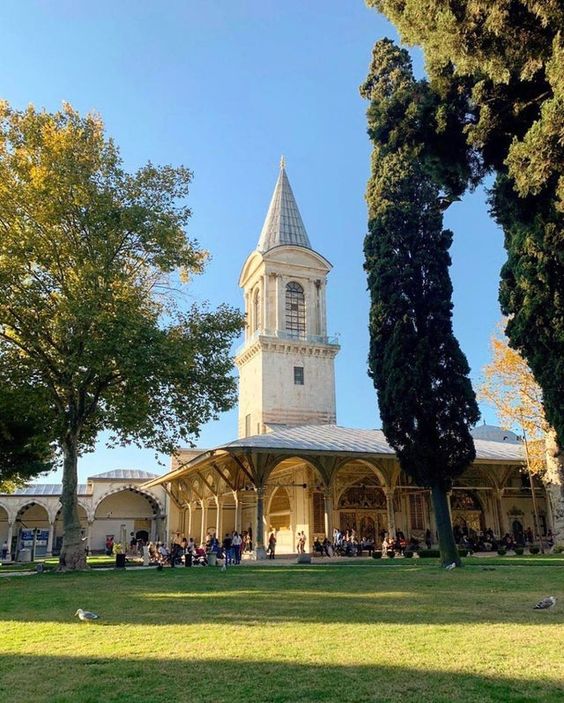 One of the most recognizable landmarks in Istanbul is Topkapi Palace Museum. Let’s talk about the brief history of this palace! Topkapi Palace was built around 1460 by the conqueror Sultan Mehmed. He made this palace for the residential and created the great Muslim architecture design in Europe.

During the reign of the Byzantine, Roman empire, Istanbul was named Constantinople. But, when the Ottoman empire takes back the land, it is called Istanbul. And the Topkapi Palace is the landmark reminiscent of the glory of Islam in the Ottoman empire.

Reportedly, there are 30 sultan generations who live in this palace, around 600 hundred years, Ottoman-ruled this country. After that, Turkey has changed the royal system becoming the republic of Turkey. Since then, this palace functioning as a museum to remind us about the great Ottoman empire at that time! 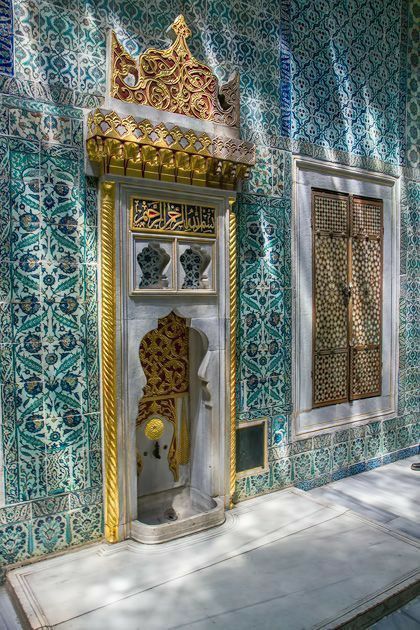 The preservation of the tile work and beautiful Muslim artwork clearly see decorated on the wall. The handmade ceramic tiles still looking awesome even though it was made in the ancient age. That means this palace is well-built, so we can see the palace looking awesome still! 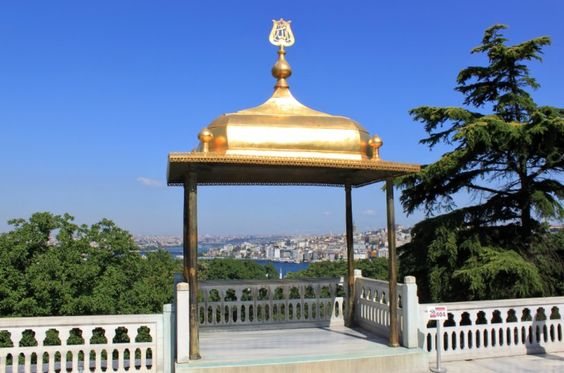 The oldest, largest, and most beautiful palace around Istanbul is definitely Topkapi palace. This palace has a size of approximately 700000 square meters. At the first entrance, you might expect this palace is not as big as it looks. But, when you enter the gate, you will see the large courtyard open area. This palace is divided into a few courtyard areas, and every courtyard area is so large. That is possible to accommodate a lot and a lot more people.

In this open courtyard area, the sultan reportedly breaks his fast in this golden pavilion. He sat and eat under this golden little dome. It has a magical view over the Bosphorus strait, which makes the sultan loves to spend his time in this spot! 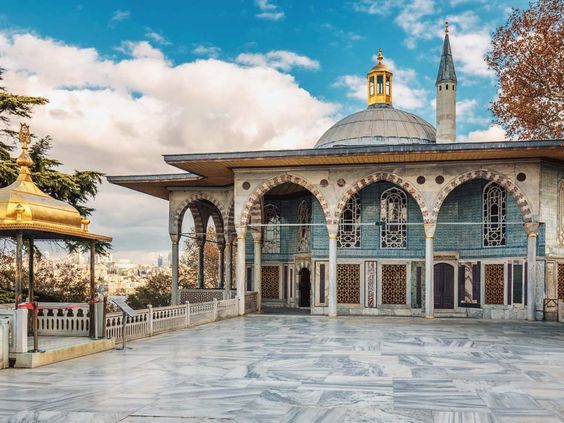 The Topkapi Palace is divided into four courtyard areas. Each courtyard has its function. Now, we take a look into the first courtyard area. When we enter the palace, we will lead into the first section of this palace, the large open courtyard area open for the public. We can see the beautiful brick facade decorated on the outer side of the palace. The larh=ge terrace functioned for ceremonial or even an open public area where the artisan, tailors, calligraphers work in this area.

During the Ottoman empire’s reign, the second courtyard took an important role. It was functioning as the ministry hall, where the sultan has the meeting. So, only a few people can enter this second courtyard.

Now, as a museum, we can visit this second courtyard which displays the imperial porcelain collections. there are dozens of antique porcelain imported from China and Japan during the Sultan imperial era. They are beautiful and what stands out the most is that they are all well-kept, so it looks like new every time it has shown to the public, they do very well the preservation of the artwork!

The third courtyard ( The Gate of Felicity) 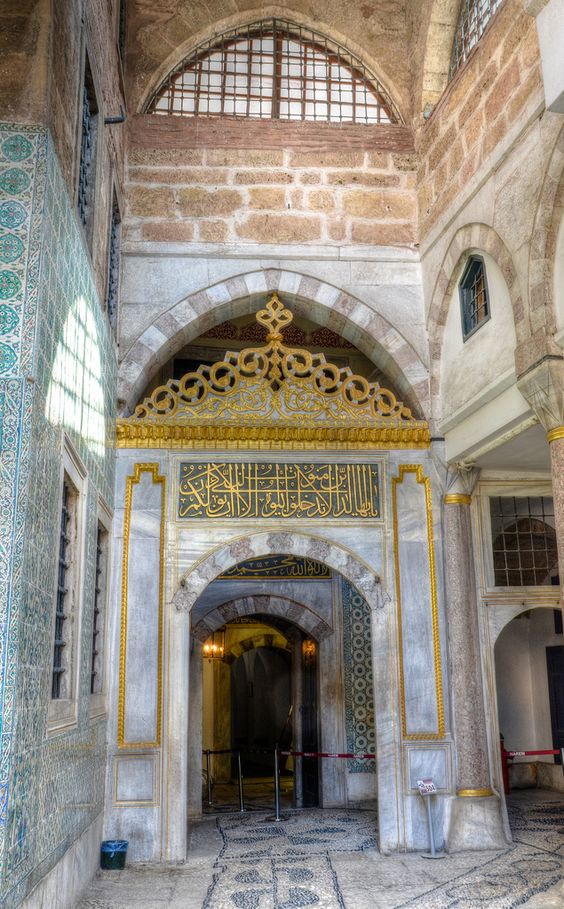 The third courtyard is the private place for the sultan and the rest of his family residence. The imperial harem is well known as the gate of felicity, this place where the sultan’s family was gathered. There are hundreds of rooms here, which only allowed the sultan’s family and some servants to come in. Now, as a museum, only a few rooms are open to the public. There are thousands of blue ceramic tiles decorated the wall, and the golden horn of the gate symbolizes the glory of the medieval age at that time! 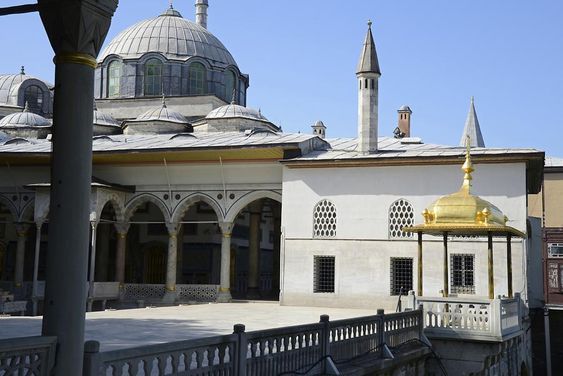 The fourth courtyard is the extension of the third courtyard. It has an open area and where exactly the sultan breaks his fast on this golden pavilion during Ramadan. 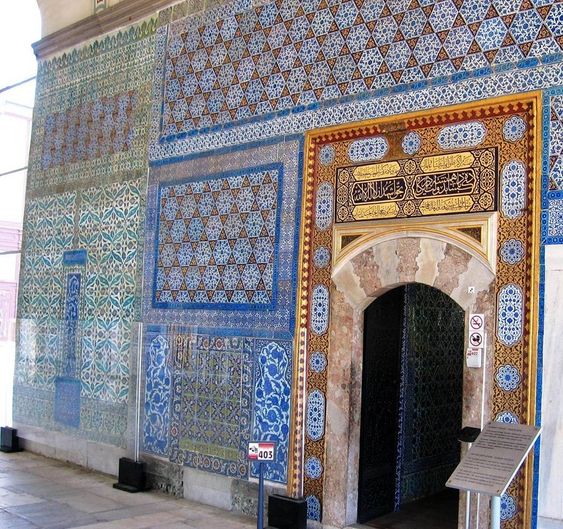 The fourth courtyard takes part as the main worship place of the palace. The main space to do some ritual religion. It was also known as Circumcision Chamber place and the terrace was lushly well-decorated.

Thus is the highlight of four courtyards in Topkapi palace, we hope this could help you to research some information before visiting this museum. Completed with the brief history of this palace, it is a worth visit recognizable landmark in Istanbul!

The principal landmark of the Bosphorus strait – Rumelihisari Fortress 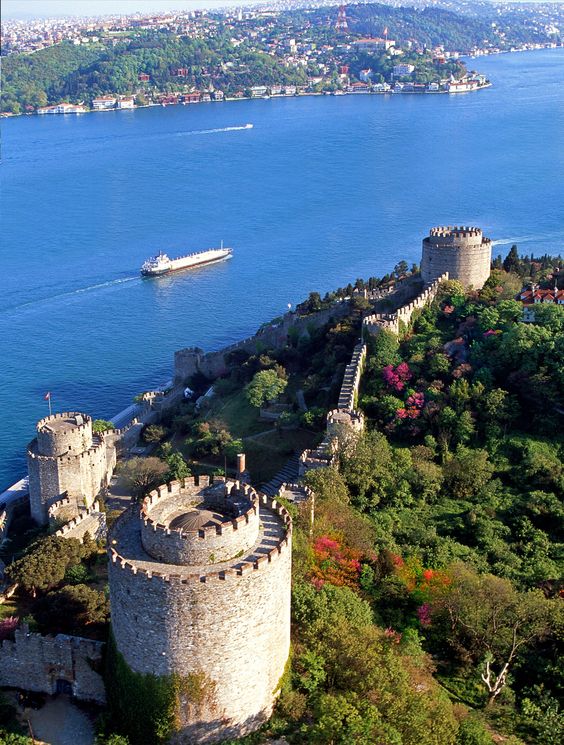 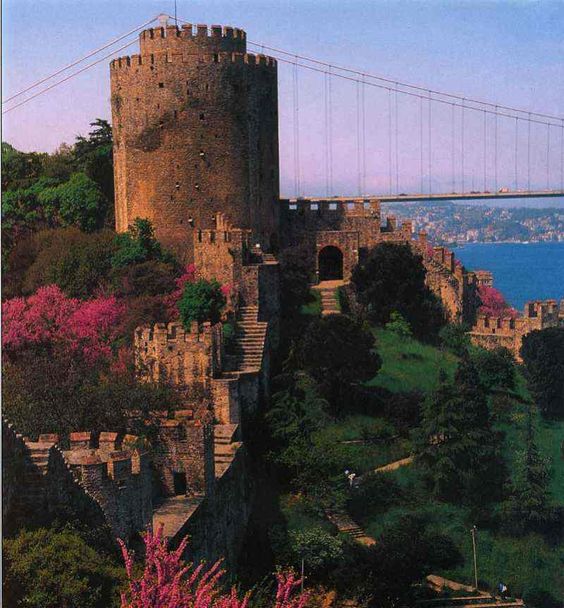 We can visit this fortress on Saturday morning where near this fortress there is a local weekly market held. And if you walk around the Taksim square, you can take a bus and tell the driver to stop at Rumelihisari fortress. There you can go down the hill around 10 minutes walk to get to the Rumelihisari castle! We notice that there is no many tourist visits this sites as much as the Blue Mosque. So, would you be the one who wanna visit this Istanbul hidden gem historical building? Let’s gathered with some local attractions around this touristy destination area, there you wouldn’t forget the experience you have made in every single journey you have!

There are lots of tourist attractions in Istanbul. In this writing, we guide you to get closer to both Istanbul’s recognizable landmarks, there are Topkapi palace and Rumelihisari fortress. By travel to these sites, it will reminiscent of us of the Ottoman empire’s glory. The history behind the name of Istanbul there was called Constantinople when the Roman Empire reigns the place. These two historical Ottoman sites is worth visit when you come to Istanbul. Plus, you can see the beautiful scenic Istanbul city view over the Rumelihisari fortress. We hope you enjoy the brief history we have shared with you about Topkapi palace and Rumelihisari fortress. So, there is no hesitation to visit these awesome Istanbul tourist destinations, their architectural design, and the deep history of Istanbul city that will make your journey so impactful!